Bringing Bruce Building Back to its former glory

The historical Bruce Building in Newcastle city centre is to be transformed into a new mixed-use development alongside the existing commercial units.

The Bruce Building on Percy Street, was unveiled in 1900, by local architect Joseph Oswald, as the headquarters of Newcastle Breweries. Over a hundred years later, the Grade II listed building is still partially in use and will again be fully utilised once the development is complete.

This landmark building is set over three storeys and has many of the original striking features and detailing. Bought by Kings College of Durham University in the 1950's, it then became part of Newcastle University in 1963.

Most of the Bruce Building is currently vacant but plans are in progress for Michigan Investments Limited, who have recently purchased the university adjacent building, to develop it and create sixty high-specification studio and one bedroom apartments as well as a café/restaurant, retail units and serviced offices.

Mark Walton is Director of Michigan Investments and has seen first hand the rise in demand for city centre apartments in recent years in his role as Managing Director of Walton Robinson lettings and estate agency.

Walton said: "The Bruce Building has been home to Walton Robinson for over a decade now. It is going to prove invaluable in terms of the company's long term future and development of all departments with Walton Robinson involved in the refurbishment, furnishing, letting and management of the apartments. The project will transform the interior of this landmark building into an exciting new mixed-use development. Michigan Investments have acquired an exceptional property which is currently under utilised and requires care and attention to bring it back to its former glory. We are looking forward to seeing the finished article improve the landscape at this end of the City.

"Walton Robinson have agreements with companies who deal with international students in their applications to the Universities in Newcastle and the North East. They have already taken block bookings of up to eighty rooms at a time and we are discussing more substantial arrangements for 2014 - 2015. We intend to use these contacts to fill The Bruce Building as well as other purpose built accommodation."

Bill Lynn of Storeys Edward Symmons said: "Ourselves and the University were keen to find a purchaser who would be sympathetic to the building's history and status and be a complimentary use for the University.  The negotiations took place over several years with timing and access arrangements dependent on the adjacent development which was completed earlier this year."

Funding for the purchase was arranged with the Newcastle, Saville Row, branch of Handelsbanken. Mike Brunskill, Branch Manager at Handelsbanken commented: "We have been working with Mark for some time on this transaction and his plans for the iconic Bruce Building are very exciting. We are delighted to have become principal bankers to Michigan and are equally delighted to be part of this major city centre renovation project". 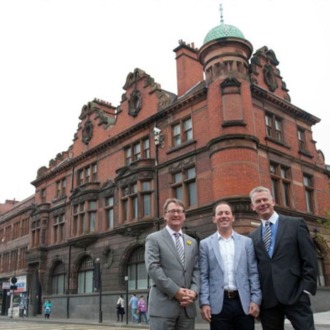